The reason I started writing this blog, is to document my work on getting an Arduino board talking to an Acorn Econet network. The Arduino has MicroSD storage, and an Ethernet port (via a commonly available shield) , both of which I hope to make resources available on the Econet network. This should be better way of providing file and gateway resources onto an Econet network, than the solutions I spoke about in the previous blog post.

It turns out that with an Arduino Due and a couple of level shifters you can just about communicate with an Econet card, and successfully load and send frames to an Econet network: 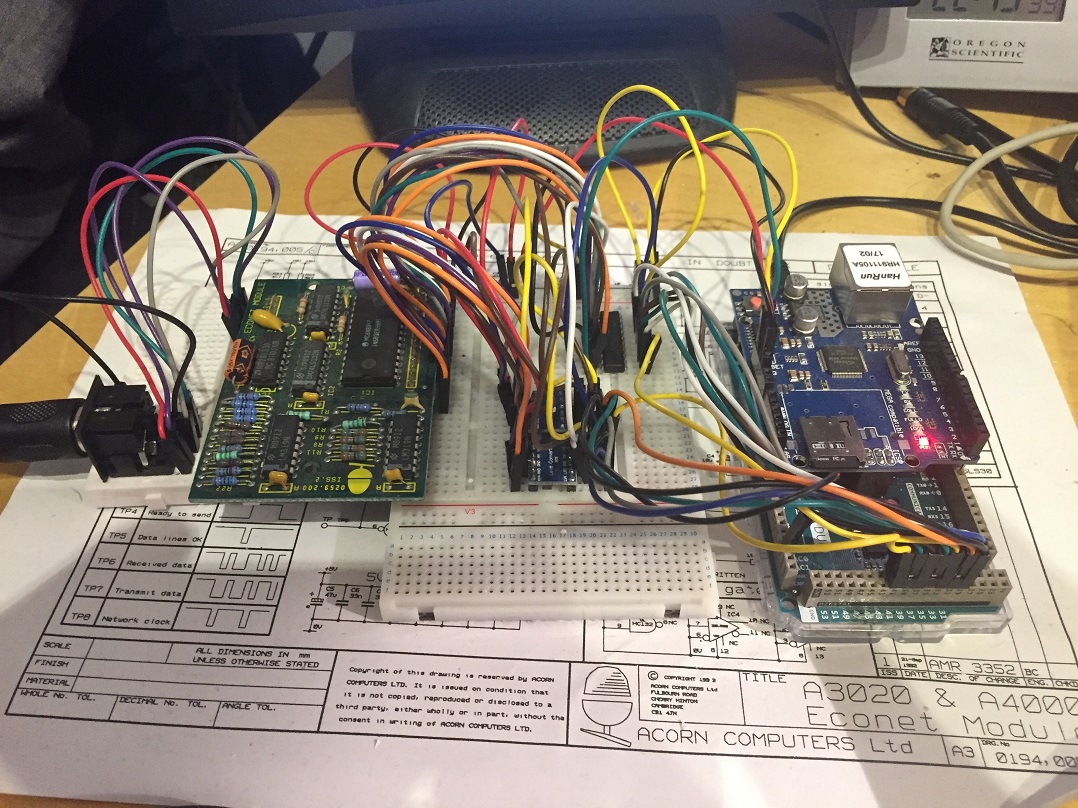 And after several evenings of programming I’ve finally got to the stage where I can log on to the Arduino, and display the user directory on the SD card: 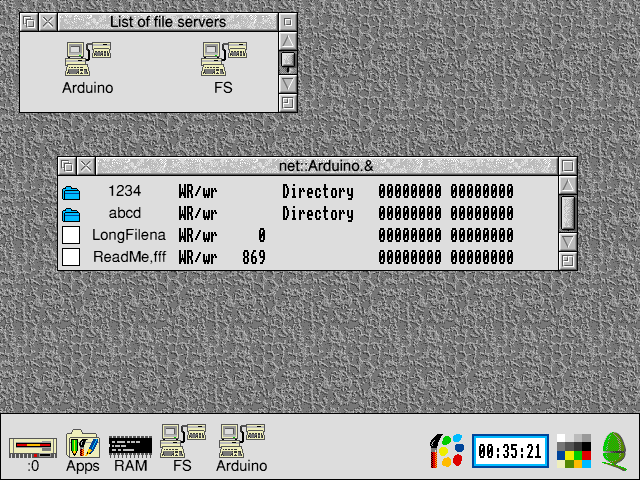 Right now there isn’t anything else you can do, other than logoff. But it’s a good start to work from.

I mentioned on a previous post that Econet provides a way of linking together a number of Acorn computers, although I didn’t go into the detail of it can help when shifting around data between newer PCs and the retro world. The short answer is that on it’s own, it doesn’t help much, as using the Econet hardware out there you cannot connect it directly to a modern PC.

The larger Risc OS machines will accept both an Econet card, and an Ethernet card (known as a podule in Acorn parlance). And so by running TCP/IP on that machine you can create a bridge of sorts between the two networks. I say ‘of sorts’ as the best you can get out of it is to set up the Acorn Level 4 fileserver on the machine alongside Omniclient, and then mount an NFS drive over the Ethernet which then appears as a shared drive on the Econet network. To run this setup you will also need a hard drive in the machine, and at least 4MB of memory for acceptable performance. You also need a handy Linux box or compatible NAS device running on your Ethernet in order to act as the shared storage.

If you have a machine of just the right vintage to be able to take both Econet and Ethernet cards, then you are limited to a pretty old version of Omniclient which is not able to authenticate against any NFS (or Samba) versions released in the last 15 years or so. If you don’t mind running publicly writeable NFS shares on your home network, perhaps because you consider it low risk, or you have other physical protection in place, this solution does the job quite well.  But after running this set up at home for a while it got me thinking: Is there a better way?

One of the many challenges that using 1980s computing brings 25 years on, is how do you get data on and off the machines?

As great fun as tapes and disks were back in the day, right now there is a huge resource of material archived online, and you really don’t want to be having to turn it back into tapes and disks to use if you can avoid it. And if you can’t avoid it, then writing 5.25 inch single density disks is not entirely straightforward on modern computer hardware to produce a disk the micro will read.

Acorn had another alternative to tape and disk for their micro computers, and that was Econet.

Econet is a half-duplex differential serial network, much like RS-485 serial networks that are still used in industrial applications today. Historically it used a foil screened cable consisting of 2 twisted pairs, and a ground wire. One pair for the network clock, and the other for the data. The clock signal was (usually) generated by a clock box situated at the mid point of the network, and the speed of the clock can be varied according to the length of the network and the speed of the machines to give a reliable transmission.

Given a clock period of 5μS, that’s a raw network speed of 200kbps. Not exactly going to set the world alight, but still faster than making a tape or disk then  physically loading it into the other machine.

As great as this is, it really doesn’t solve the problem of moving data about in a modern retro computing environment, at least not on it’s own it doesn’t.